I think it’s fairly safe to say that no one would gasp in offense if they heard you or me say in public, “I feel fat.”

We’ve sort of conditioned ourselves to let that phrase be or go even if it, at worst, is a bit awkward to hear in real conversation.

Once upon a time phrases like, “that’s gay” and “you’re retarded” didn’t carry any importance either until someone spoke up and asked,

“What the hell does that mean any way?”

And then when you try to explain it you realize, OMG using the term “that’s gay” to mean that doesn’t make any sense or that’s stupid is brutally repulsive.

The same goes for “you’re retarded.”

Find a synonymous phrase and then it hits you… that’s not okay to say.

My daughter is almost 6 and has no concept that there’s a “feeling” called fat.  She could eat a bag of chips and NOT FEEL A DAMN THING… except full or lethargic… but fat?… no… she’s not going to feel fat because FAT ISN’T A FEELING! 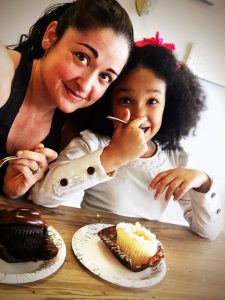 And I’m genuinely worried… at what age do we learn to “feel fat” instead of sad, disappointed, angry, lonely, rejected, resentful, or unattractive.

Because at the root of “I feel fat” is a bunch of negative emotions swirling around.

So you see… THAT’S MY SCARE!

That’s why I’m hating this phrase so much.

If my daughter feels sad or rejected… I want to get to the root of that.  I need her to have the right words to express that.  It’s too easy to just write off sadness or anger or resentment in “I feel fat” because it doesn’t allow vulnerability and I believe 100% we WE HAVE TO have the courage to expose our emotions in order to overcome our demons.

FEELING FAT is a scape goat phrase.  It defers responsibility and gets people talking about the wrong solutions.

And sure, I’m the first one to tell you that good nutrition and exercise spill over into helping all kinds of health issues, including depression, but I’m not going to let “I feel fat” off the hook so easy.

I don’t want my daughter learning nor using that phrase to express an emotion because as a parent, it leaves me DEFENSELESS and incapable of getting to the root of what’s really going on.

What all of this means is that WE, the adults, and in particular, WOMEN have got to stop treating “I feel fat” with such casual disregard.  The phrase associates negative emotions to a descriptor (just like that’s gay), is an easy avenue to self bully, and is an obvious distractor of what lies beneath…

which is, of course…

insecurities and feelings… probably big deal feelings… that need some attention, some time, some exposure, and a VOICE!  We can’t fix what we can’t identify.  We can’t work on what we refuse to admit.  Vulnerability is scary stuff but it leads to some amazing self discovery….

So, I’m challenging your self awareness.

The next time that phrase pops into your head and wants to be verbalized… allow yourself to stumble and shuffle through a list of words that will more accurately portray what’s going on in your mind.

Get uncomfortable, stay uncomfortable and don’t let that scape goat phrase continue to create a barrier in finding the right solutions to the real issue.