If you know anything about me and how I coach fat loss, you know I love mindset but I’m also not afraid of numbers.

I’m totally fine getting formulaic with calories and macros and deficits  in a world where “just listen to your body” is all the rage.

And it’s an awesome protocol, btw.

YES!… you should ABSOLUTELY listen to your body!!!!!

The thing is, that “kumbaya” diet advice fell hella flat with me back in the day when all I was doing was binge eating at night, feeling ashamed of my inability to follow my goals, and frustrated that I “couldn’t stay on track.”

WTF does “trust your body” mean to a person who habitually finds themselves standing in front of the pantry, frantically stuffing cheerios into their mouth, promising themselves this is the last handful only to reach back in again?

I felt BETRAYED by every single hunger/fullness cue my body sent my way??!!??  Your fat loss solution was trust… HA!!! 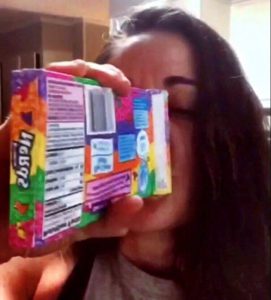 I don’t start fat loss coaching with numbers because I believe numbers are inherently better than an intuitive eating approach.

I just know at my peak of frustration, the assumption that I had a strong enough relationship with my body to TRUST it, was laughable at it’s best and punchable on most days.

So yes, in Diet Rebellion, my fat loss coaching program, we get right to work on finding basal metabolic rates, total daily energy expenditures, and deficits because I am working with people, who like me, believed their bodies were deceiving them at every meal time.

With that said, numbers alone, DON’T HOLD THE KEY either, so from day 1 we also dive into some of the behaviors and beliefs that created the patterns that keep us stuck.

Below, I’ve listed 3 for you to consider and none are contingent on you trusting your body cues at meal times, btw.  All three points are loaded, however, and I plan to expand each farther Thursday night at 7:45pm (June 8th) on Facebook Live.

In particular, myth #2 and the statement  ***Create a calorie deficit you can COMPLY with 80-90% of the time.  Both are loaded and require a good bit more explaining, especially if you’re walking in highly distrustful of your body.

Information overload is a real thing.  At some point, we simply know ENOUGH to commit and the quest to find an undiscovered trick in the bag leads to CONFUSION, DISORIENTATION, and the FEAR of getting things wrong.

“I read a Facebook article that said to eat more fat, but then this other one said to eat less fat.”

“My friend sent me a Facebook article that said carbs pre-workout are optimal but I read one that said they are better post workout.”

We end up doing everything and nothing at the same time.

Turn down (or OFF) the volume on details with words like “optimal” and “greatest” and put your energy GETTING BACK TO THE BASICS!

As healthy as almonds are, you CANNOT eat a jar of them a day and lose weight.

Stop mindlessly eating them because every single magazine article and blog post lists them as an OPTIMAL midday snack option!!!

If a small amount isn’t actually satisfying your hunger WHY ARE YOU EATING THEM?????

Because they are “good” and other things are “bad.”  Because “clean eating” makes you a better person than eating “dirty” foods.

Almonds are great, sure, but they do pack a caloric punch that adds up fast.

YES… Sometimes you should EAT THE CHEEZ ITS for the simple, honest, and human reason that they’re going to hit the spot, you can finally stop craving, and in the long run eat LESS calories because you did so.

I get it.  A bodybuilders methods work.  You get shredded.

Quick question, though… do you REVERSE DIET like a bodybuilder too?

Oh, don’t know what that is because Shape magazine always seems to forget to publish the other side of the shreddedAF industry, right?

Reverse dieting is when you take the BRUTAL 12-16 week 6 pack meal plan and work backwards from stage ready so that you don’t gain a DISPROPORTIONATE AMOUNT OF FAT back after such hardcore dieting.

Shredding for the stage is HELL FOR YOUR METABOLISM and anyone in the sport of bodybuilding who aims to stay there actually goes (or is supposed to go) through another long ass period of reverse dieting beginning their off season.

If you can take the 4 oz tilapia, 1 cup broccoli, and 3 oz of sweet potato meal plan for 12 weeks, you eventually have to learn to eat more moderately anyways.  Your body WILL NOT ALLOW YOU to stay shredded like that or eat so minimally without real and major repercussions.

One of those being HABITUALLY binge eating!

Okay… so this his blog post is by no means comprehensive.

I consider it a starting point for introspection and discussion and that’s why I’m excited to do and think it’s necessary to do a Facebook Live, Thursday, June 8th at 7:45pm.  Gah!  I love coaching live and in person!