If you don’t like the way something is done or viewed, change it or at the very least start by making sure you don’t participate in it.    Below are 4 core values I think every gym/studio should be  practicing on the daily!

About 2 months ago I started going to YouFit right down the road from Sweat b/c I NEEDED a spot where I could put on my headphones, lift like crazy, feel like a badass, and not be distracted by having to take out the trash, sweep, or tidy up.  And while YouFit has allowed me to workout without feeling like I have work responsibilities ahead, every time I walk in it’s a HUGE reminder of why I opened up Sweat!

Girls on cardio machines.  Men on weights.  It’s as if there’s an imaginary sign that says girls to the left, boys to the right, and anyone over 45 should only workout on machines.

Hell yes, I’m proud to break the mold and coach men and women from ALL ages in ONE free weights environment.

The benefits of lifting and moving functionally are NOT GENDER SPECIFIC!!!

Women end up on the cardio machines because they generally feel un-welcomed or un-knowledgeable on the free weight floor.  All they need is an open door and a willing trainer to get them pumping iron.  And while I’m proud as hell to have a big female following I’ll be damned if I allow the misogynistic comment that we’re a chick gym.

We’re one hell of a strength training studio who decided strength and cardio needed to be programmed properly to prevent injury as well as boredom. 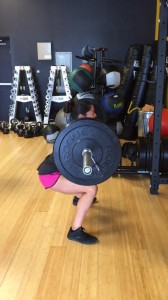 2.  What does beginner and advanced even mean???

I HATE, HATE, HATE the idea that fitness is categorized according to specific training levels.

I spent 8 years as a public school teacher and had EVERY LEVEL of cognitive ability in my Spanish classes.  I had kids who were brilliant at every subject in school, I had kids who were brilliant in their core subjects but struggled in a foreign language.  I had hearing impaired kids or kids w/ dislexia right along side kids with no other struggle than low motivation.

This diversity is REALITY and I welcomed it not because it was a personal challenge but because teaching is in my blood and I couldn’t wait to make a success out of everyone in ONE classroom.

FITNESS IS NO DIFFERENT!

There are people who are natural born athletes and understand how and when to move their bodies with very little coaching, there are amazing endurance athletes who run like cheetahs but when asked to rotate and throw a ball don’t understand functional patterns.  There are without a doubt people coming in with real physical issues or just plain old low motivation too.

That doesn’t mean you separate everyone!  You do exactly what thousands of teachers are asked to in every subject on a daily damn basis.  You get creative as hell and create programs where those who are strong also focus on their weaknesses, you make it so that each group can feed off the other one, you get one-on-one with some folks, you modify without “dumbing down” anything or make something harder without putting their bodies at risk.

Labels alienate rather than elevate. 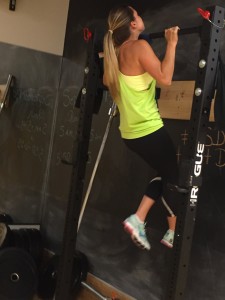 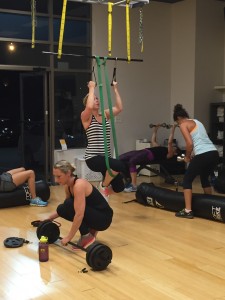 Yup, I said it.  As a general rule, I hate group fitness, because it’s easy for the instructor and dangerous for the client.

With that said, I do know a handful of amazing “group fitness” instructors who should actually stop using the term b/c they love their people so much they are actually doing what we do at Sweat, COLLECTIVE PERSONAL TRAINING.

When you train a group of people as individuals, you know their strengths and weaknesses on a personal level.

You have thought about alternatives for them before they even enter the room.

You don’t view the person in the class who has to cater to a weak knee, a previous shoulder injury, or doesn’t know proper form as nuisances.  They are as much a part of the class as anyone else and their individual needs must be met with as much gusto as everyone else’s.  That might mean you modify range of motion, load, impact, or volume.  However, these modifications aren’t labeled as better or worse, good or bad.  They just are so just LOVE YOUR PEOPLE!

Damn straight it’s hard to get to know your people, to create programs for them that challenge them daily, to modify whenever needed, to find research that will help them.  I DON’T CARE…do it ANYWAYS!

If the general public knew how little a personal trainer got paid out of the $40 or $50 they dished out at most gyms, your jaw would drop.  It’s no wonder it took me FOREVER to find just the right people to join me at Sweat.  The industry has a tendency to weed out the good ones real fast.

When I started Sweat, I wanted to make sure my trainers not only got paid well, could keep their own personal training rates, but also would be viewed as family.  Every single one of my trainers works at other gyms or run their own boot camps or classes elsewhere.  GOOD FOR THEM!

We aren’t each other’s competition!  I hate the way our industry somehow wants to pin each trainer against the other or each studio against the other.  My success doesn’t equate to your failure and vice versa.

They are a big part of what makes Sweat unique and powerful.  Do you follow them on FB or IG?  If not, you totally should!  They are great people!!! 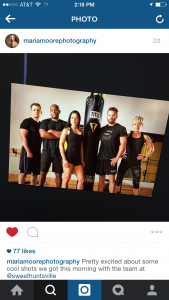