The email below comes to you as an email originally meant for my eyes only.  It was written in the heat of the moment when our feelings about being challenged or being hurt are still getting sorted.

In other words, don’t you dare get hung up on misspellings and punctuation because the messages are too DAMN POWERFUL to ignore!

Your boldness, your audacity as a female lifter, as a female with muscles, as a female who believes in and loves the power of her body, can absolutely rub others the wrong way.

In a matter of months, Raven’s femininity, sexual orientation, and capabilities have all been questioned as her body has changed from a lean and long softer body to a lean and long muscular one.

I want to point out that Raven is generally a very private person on social media, so I wasn’t sure she’d allow me to share her email with you when I asked.

To say the least, I am grateful because Raven displays the inner strength of a woman who can comfortably endure criticism about her body, her look, and her choices and still decide to do things her own damn way.

“Today, something was brought to my attention that bothered me, which is surprising. I was told by one of my long time friends that the picture I put on social media of me deadlifting 205lbs made her and other people think I was too masculine, enough to remark “does she like women now?” Even my sister made that comment a while back, but never really thought about it until now. 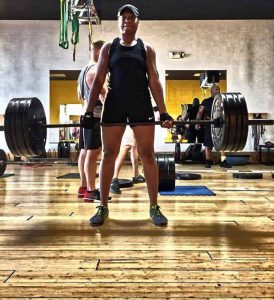 What the hell, so a female cannot be strong and like it without having a stigma attached to them?
I have always been very slim but (not) toned.
But I actually love the way I look now.
And heaven forbid if you have short hair like myself…. so I must be full blown lesbian.
I guess it is ok to be a female with $50,000 of plastic surgery holding an expensive hand bag than a female that is healthy and strong, that deadlifts, squats and runs marathons.
Go figure, I will be 40 next year and I feel great. If the myscles in my arms make people uncomfortable now, than they will hate me when they see my abs!
I guess society thinks a woman is at her prime in her twenties. But I think that people expect women to become consumed with marriage, kids, work and life in general to not focus on her appearance and health.

I guess they thought they saw me at my best, thinking that was it.

Well I am tougher and stronger, smarter and happier, which in turn makes them feel some type of way.

Not apologetic for not being “normal”.
And no this is not what happens when you join the Army either.
It’s called being the best of yourself you did not know existed.”

I read this email several times before responding back to Raven because it left my brain swirling with important questions and messages which I have jotted down below!

I could easily turn each point into it’s own email in Sweat Unfiltered as this is generally the place we air out our juiciest stuff, but I’d rather hear DIRECTLY back from you first- jeidi@sweathuntsville.com or with comments directly underneath our Facebook post.